The U.S. Treasury Inspector General for Tax Administration (TIGTA) this month has published two reports that consider differing aspects of the Internal Revenue Service's recent performance – and has arrived at many of the same conclusions that the National Taxpayer Advocate, Erin M. Collins, did, in her annual report to Congress back in January, on what the IRS needs to do to improve its efficacy.

Like Collins's so-called "Purple Book" of recommendations, the TIGTA reports point to such issues as too many paper returns and other documents, as opposed to electronically-filed ones; "significant staffing shortages" and "backlogs" of tax returns from previous seasons (see table, above) as affecting the IRS's ability to deliver its services to taxpayers in an efficient and timely manner.

The two reports, in order of their release, are entitled Interim Results of the 2022 Filing Season, dated May 2; and A Service-Wide Strategy is Needed to Address Challenges Limiting Growth in Business Tax Return Electronic Filing, dated May 4.

Among the potential headline-making elements in the reports is a reference, in the report on business tax return filings, to the IRS's decision in March of last year to "destroy an estimated 30 million paper-filed information return documents," of a type used to conduct post-processing compliance – which the agency's inability to process its huge backlogs of paper documents was said to have contributed to.

The Interim Results report acknowleges that as of March 4, 2022, 97.2% of the 54.7 million returns it had received at that point – out of the 160.7 million individual income tax returns it expected to receive during calendar year 2022 – had been electronically filed.

"However, significant staffing shortages continue to hamper the IRS’s efforts to address backlog inventories, and affect the IRS’s ability to ensure that current year tax  returns are processed timely," a summary of the TIGTA's findings goes on to point out.

"The IRS also continues to experience shortfalls in hiring in the functional area responsible for providing taxpayer tax account assistance. For example, as of March 17, 2022, the IRS onboarded 3,827 Accounts Management employees, which is 76.5% of its hiring goal of 5,000 for the 2022 filing season."

The 41-page TIGTA Interim Results report is described in its introduction as having been done "to provide selected information related to the IRS's 2022 Filing Season," on an "interim" basis, and for this reason doesn't  contain any recommendations.

As the name of the second TIGTA report indicates, recommendations are the whole point of this document.

The TIGTA  experts who wrote this report not only use their main recommendation (that the IRS "develop a service-wide stragegy to prioritize and incorporate all forms for e-filing") as the basis for naming their report, but also make two other major recommendations: that the IRS "develop processes and procedures to identify and address potentially noncompliant corporate filers" as well as that it "develop processes and procedures to ensure that penalties are consistently assessed against business filers that are noncompliant with e-filing requirements."

And while this report focuses on business tax return filing, as opposed to the tax filings of individual American taxpayers, in its description of the degree to which the IRS is overwhelmed by its workload, due to a combination of the effects of Covid, lack of staff, and an existing backlog from previous tax seasons, portions of it could almost be mistaken for excerpts from National Taxpayer Advocate Collins's most recent annual report to Congress (in January).

(As reported, in stressing the need for the IRS to do away with paper filing (in favor of electronic returns), Collins said, at one point, that paper was "the IRS's kryptonite, and the agency is still buried in it.")

The TIGTA report's authors don't actually use the word "kryptonite", but do point out that their report had been initiated "because the IRS's continued inability to process backlogs of paper-filed tax returns contributed to [IRS] management's decision to destroy an estimated 30 million paper-filed information return documents in March 2021."

They go on to add: "The IRS uses these documents to conduct post-processing compliance matches, to identify taxpayers who do not accurately report their income.

"TIGTA previously reported that there were actions the IRS could take to reduce paper filings and/or convert paper tax returns into an electronic format...

"our overall audit objective was to assess the effectiveness of the IRS's efforts to modernize paper tax return processing and increase e-filing."

Later, the report notes that "the cost per paper-filed return ranges from US$3.04 to US$15.21, whereas the cost to process the same tax return electronically ranges from less than US$0.01 to US$0.37." (See table, below, from the report.)

Predictably, perhaps, preparers of U.S. business tax returns have reacted to the news of 30 million paper-filed information documents having been destroyed with horror, according to a CNBC.com news report, which quoted Brian Streig, a CPA with Calhoun, Thomson and Matza LLP in Austin, Texas, as calling the reported destruction of the paper files a “break of our trust,” and pointed to the burden on the business community.

“Small businesses stress out every year in January, trying to accurately prepare these informational returns and get them filed on time,” Streig told CNBC.

“To see the IRS just destroy these is almost like the IRS admitting they don’t really care.”

It added: "The remaining 1% of those documents were destroyed due to a software limitation and to make room for new documents relevant to the pending 2021 filing season," and there were "no negative taxpayer consequences as a result of this action."

The IRS further blamed "system constraints" that require it to process all paper forms of this type "by the end of the calendar year in which they were received," which means that such returns could no longer be processed once the filing season for 2021 began anyway. "Not processing these information returns did not impact original return-filing by taxpayers in any way, as taxpayers received their own copy to use in filing an accurate return." 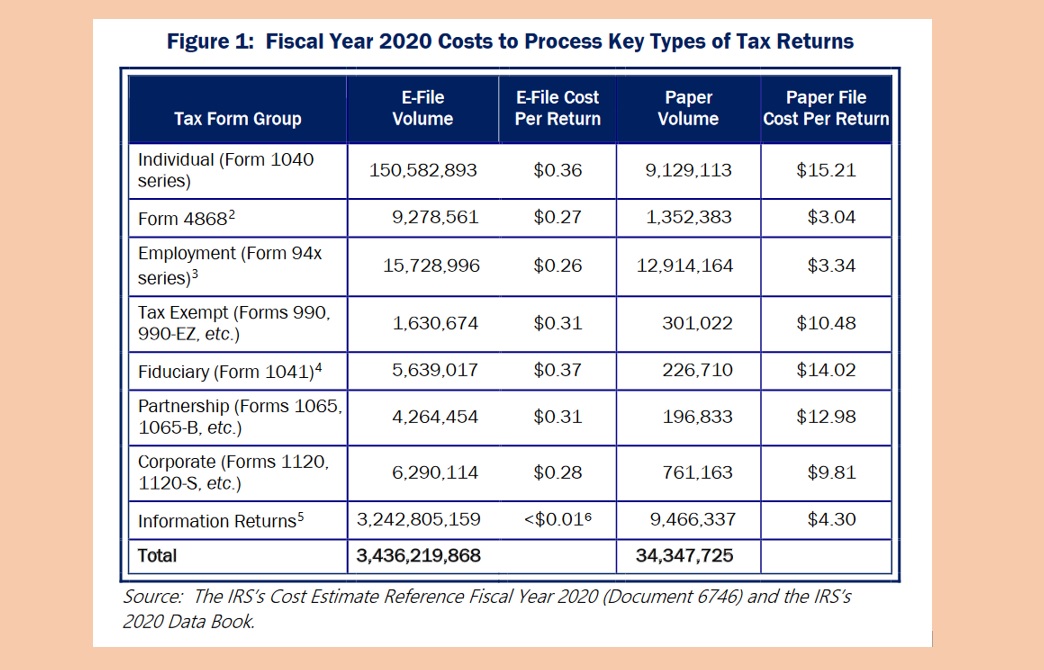 Returning to the TIGTA recommendations contained in the second report, meanwhile, the IRS agreed with the first one, about the need for it to develop a "service-wide strategy to incorporate all forms for e-filing", but "did not agree to the other two" recommendations.

" IRS management stated that they did not need to develop processes and procedures to identify noncompliant corporate filers, because all requirements needed to assess penalties are not known at the time of filing," the report notes.

The IRS also argues that it already has "systemic processes in place for e-filed partnership returns, which were found to be working as intended," and notes that other types of business returns "have differing criteria for e-filing requirements and exceptions to the requirements, which prevent the implementation of a standard process for all business filers."

To this, the TIGTA report's authors note that TIGTA "believes that IRS management's justification for taking no action on [the] two recommendations is insufficient" and that the IRS "should take additional steps, in an effort to continue to reduce paper return filings."

The Treasury Inspector General for Tax Administration (TIGTA) was established under the IRS's Restructuring and Reform Act of 1998, to provide independent oversight of IRS activities. Its mission is described as being to "promote the economy, efficiency, and effectiveness in the administration of the internal revenue laws," while remaining committed as well "to the prevention and detection of fraud, waste, and abuse within the IRS and related entities." Its website is www.treasury.gov/tigta.

More in this category: « Dems Abroad TTF in move to open door to discussions on FATCA's future