"Avoid illiquid assets, rotate out of cyclicals, and, given that interest rates seem likely to remain low for the foreseeable future, seek out the right income producing assets where possible," were among the messages that around 50 delegates attending the American in Britain magazine’s annual autumn tax and finance seminar earlier this week received – alongside some light snacks and beverages.

London & Capital executive director Jonathan Gold, one of three speakers at this year's event, began his talk by noting that the current investment climate is challenging even for experts at the moment, given, for example, the fact that a number of contradictory economic indicators are "flashing" at both ends of the dashboard at the same time.

As a result, he told his audience, investors need to stay invested, but in a low-risk way.

Also speaking at the event, which, like last year's seminar, was held in a dining room of the London outpost of New York’s Smith & Wollensky steakhouse chain, were Roland Sabates, president and founder of Kansas City-based American Tax Partners; and Mark Greer, head of the CAF American Donor Fund, a charitable institution that enables American expatriates to make donations to charities in a way that is most efficient from a tax perspective. 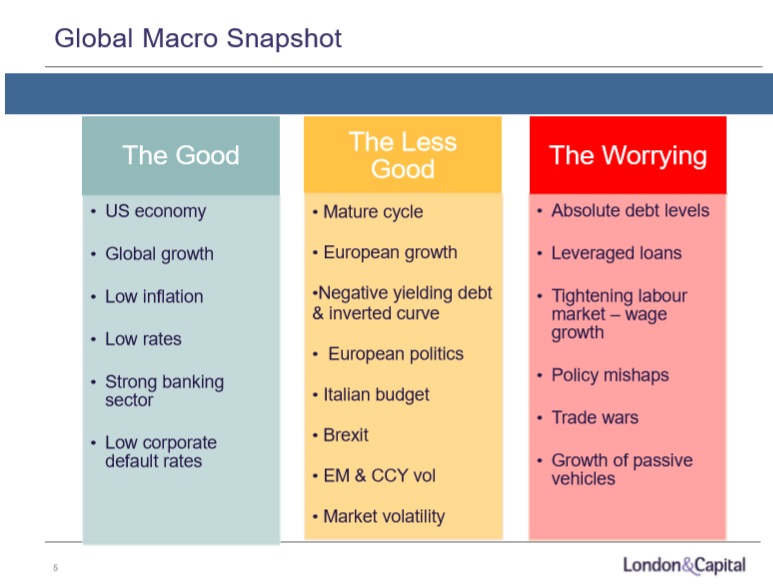 Then there are those economic signs that defy conventional analysis, Gold went on.

“We’re about 11 years into this current economic cycle now...there’s no doubt that this is late in the game.”

Then there’s the never-before-experienced emergence of so-called passive investing as a dominant factor in the market, he went on.

"Passive investments now account for 20 to 25%” of all investments these days, an unprecedented development that Gold says is seen as representing a potentially major risk.

“When passive investing first started out, the investments were ‘price-takers’ in the market" but weren’t big enough to affect it, he explained.

“They were a cheap way to track an index,  a very convenient way to build some diversification.

“[But now], when you add computerization and automization into the mix, you basically have a house of cards that could fall very very quickly… we haven’t seen the full impact of [this new phenomenon before], through a recession or a full market downturn.

Yet another distinctive feature of the investment landscape at the moment is the fact that "30% – or a third" of all the bonds in the global marketplace are "negative-yielding", which Gold noted are worth a total of US$17 trillion, roughly equivalent in size "to the total U.S. economy".

"What does that mean to you as an investor? It means that if buy these bonds and you hold them to maturity, you are guaranteeing yourself to lose money."

Summing up, Gold stressed the fact that low inflation meant interest rates would also remain low, putting investors in the position of having to seek out "the right income producing assets".

"Avoid illiquidity. If you're buying equities, don't buy emerging market companies. Rotate out of cyclicals...because if we're coming to the end [of the economic cycle] they're not going to do very well.

"Avoid small cap-companies; avoid things you can't get your money out of quickly – that's really important.

"Really my key message is, 'put together a plan which is simple to understand, income-producing if you can find it, and liquid'."

American Tax Partners' Sabates began his talk by addressing the complexities that come with being an "international/cross border family, where one spouse is American and one is [not]." 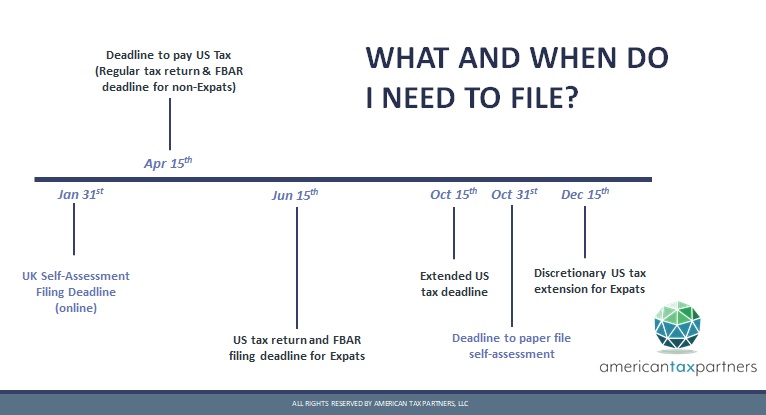 For most people this means adopting a "married filing separately" (MFS) status, which he noted brings with it higher U.S. tax rates though "not higher than the UK's".

"If you’re paying more than half the cost of keeping up a home, or a dependent child, you may be eligible to use head of household (HOH) filing status," he added.

"I should point out that there’s also an election that will allow you to file jointly in the United States, with your UK spouse." Because this means that the UK spouse is then considered to be U.S. tax resident, and thus taxed by Uncle Sam on their world-wide income like an American, Sabates went on, it is something of a "difficult sell" for most UK resident couples who might qualify.

Still on the subject of families and their tax implications, Sabates next addressed the so-called child tax credit. Expansion of the eligibility for claiming it, and a significant increase in the amount American taxpayers can receive as a result of it, he noted, was the main if not the only, benefit "for anybody in this room" of President Trump's 2017 Tax Cuts and Jobs Act.

"Before, if you were married and filing jointly, the limit for claiming the child tax credit was US$120,000," he said.

"Now that's been increased to $400,000. And the way the credit ordering rules work is that all the UK tax that you’re paying, you’re going to offset the US tax with those payments, and then that credit becomes fully refundable. [Which is]  US$1,400 per child below the age of 17, at the end of the year.

At one point Sabates went out of his way to stress the importance of filing Foreign Bank Account Reports, as the penalties for not doing so are particularly harsh, and the requirement threshold is low (US$10,000).

"Unfortunately, these rules were designed [to catch] U.S.-based individuals who are funnelling the profits from their U.S. [businesses abroad]" and not expats, Sabates explained.

"But you're the victims of circumstance here, and they are going to require you to report your non-US. accounts and assets to the United States.

"And this US$10,000 FBAR filing threshold is not per account, that’s the aggregate value of all of your accounts, and they can assess a US$10,000 penalty per late FBAR filing."

Summing up his key points, Sabates stressed the importance of determining your eligibility for the child tax credit, especially "if that's something you've been leaving on the table, you can even go back and amend the last three years of your tax returns, and claim those refunds"; the need for American expats to "seek personalized advice immediately if you are an owner of a closely-held UK limited entity, particularly if you have retained earnings"; the fact that Americans living in the UK need not "be afraid of Individual Savings Accounts and other UK investments – just make sure to understand the U.S. tax consequences at the outset"; the importance of being "mindful of future exposure to UK inheritance tax"; and the need to "take action now if you are non-compliant with U.S. taxes".

Last up to the podium was Mark Greer, a senior manager at the CAF American Donor Fund, who heads up the entity's operations that help ultra-high-net-worth and high-net-worth dual UK and U.S. taxpayer individuals to maximize the impact of their philanthropy by doing it in a tax-efficient manner.

Greer detailed the various ways those wishing to donate to charities can do so in ways that ensure the most money ends up in the accounts of the causes they are seeking to help fund.

American in Britain is distributed free of charge to 20,000 Americans four times a year, and has been in circulation for more than 30 years.