BMP Wealth Ltd. is a Hong Kong-based wealth management firm that was set up in 2017 to cater to the wealth management needs of what it calls "internationally-minded people," from such countries and regions as the UK and elsewhere in Europe, Canada, Australia and China. And now, it's in the process of entering the American expat wealth management sector as well, the company has told the American Expat Financial News Journal.

The new American expat wealth business was officially unveiled last week, in the company's first weekly update to clients, as part of a company-wide update that also included a revamping of its website.

In an interview, company co-founder and chief executive Howard Clark-Burton explained that he and his colleagues saw the American expat market as "under-serviced" in Hong Kong and China, even though there are – still, the recent political turmoil in the "Special Administrative Region" of China notwithstanding – many American expatriates living there.

"Many if not most major U.S. corporations that do business in Asia will have an office in Hong Kong, and at least some of their staff are likely to be American, or have U.S. investment issues, such as pensions," Clark-Burton said.

"There are also many Chinese-Americans whose lives, and whose families' lives, take place in both countries.

"When you've been in wealth management as long as Ian (Marsh, his original partner in the business) and I have – I've been looking after expats here since 1997, he's been here since 2001 – you sense when there's an area in the marketplace that isn't being serviced as well as it might be."

For the moment BMP Wealth only has "a handful" of American expat clients, but it expects to have more, as it develops its offering for the market.

Clark-Burton is originally from Bournemouth, a seaside town on the southern coast of England. He says he first came to Hong Kong in 1997.

For almost 17 years he worked for a Hong Kong wealth management firm known as Financial Partners, which at one point was part of a group of cross-border independent financial services companies located in Indonesia, Japan, Malaysia and the UAE, as well as Hong Kong. Like many other businesses operating at that time it went through a restructuring after the global financial crisis in 2008, with the Hong Kong entity finally being sold to a UK consolidator in 2014.

Clark-Burton remained in Hong Kong, where he and Marsh monitored the evolving wealth management landscape there as they contemplated launching a new business.

They finally did, in 2017 – calling it BMP Wealth, with BMP standing for "Build, Manage and Preserve", Clark-Burton's summary of what a wealth management strategy should do for an individual.

The company benefits from the financial backing of Buchanan Capital, a Hong Kong-based private equity investor that focuses on "unlisted firms operating in the financial services industry", and which includes among its other holdings a stake in Amsterdam-based Black Swan Capital Europe and Black Swan Financial Planning, and UK-based Altura.

"This time around, we use technology as an enabler to keep our business costs low, while achieving a high-level of client experience," Clark-Burton says.

"We believe that by combining that with 'advanced market' tried and tested solutions, we can genuinely provide our clients with transparent and robust wealth structures that are also competitive. 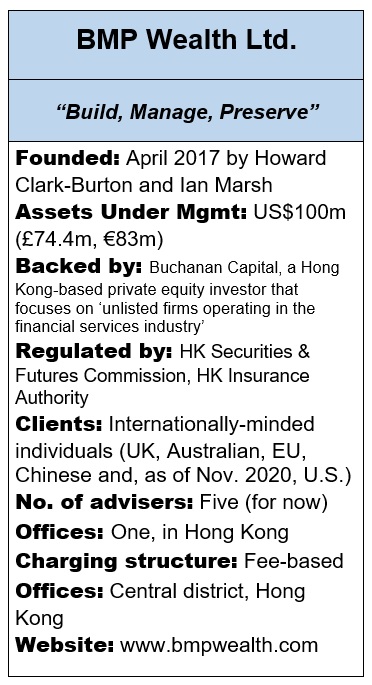 "People like to over-complicate things, but what good wealth management boils down to is ensuring that an individual has enough money to live in comfort and without having to cut corners for the rest of their lives."

For now, BMP Wealth's American operation functions as a "hub" that outsources, as needed, to regulated specialists to handle clients' tax and U.S.-domiciled investment, insurance and retirement-planning needs. It also uses the international platform offerings of Fidelity and the Australian platform giant Praemium, which, Clark-Burton notes, has an annual U.S. client reporting service that clients and their advisers find well worth the money.

Clients are invited to download a 14-page "Guide for Americans in Hong Kong", which explains what FATCA, PFICs, FFIs and U.S.-connected persons are. (The guide may be accessed via BMP Wealth's website by clicking here.)

While some might hesitate to launch or expand a business in Hong Kong at the moment, given its recent and ongoing political turmoil and uncertainty, Clark-Burton says he and his colleagues are taking it in stride.

"Yes, Hong Kong is going through a difficult time at the moment, but it will survive, and even thrive," he says.

"Since I've been here, I've seen, and lived through, the Asian Financial Crisis, the Dot-Com boom/bust, SARS and the 2008/2009 Global Financial Crisis. And one thing I know is that as these things are happening, people still need advice, and indeed, if anything, they need experienced, regulated and ethical advice more than ever."

In fact, he adds – perhaps not surprisingly, given all that – that BMP Wealth is hiring at the moment. Specifically, he says, they're recruiting for a "U.S.-licensed adviser to join the team..."