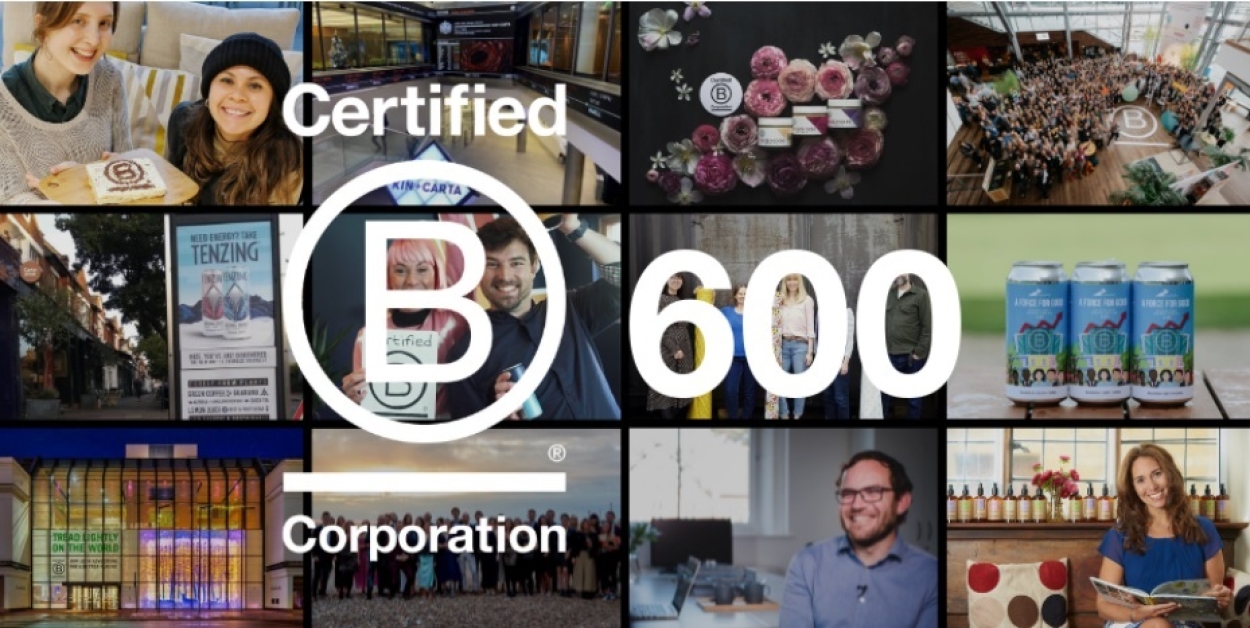 In January, the number of B Corporations in the UK hit 600, making it the No. 2 B Corps jurisdiction after the U.S.

And importantly for those who like for the money they invest to help environmental and socially-responsible causes, rather than polluting and otherwise unremarkable companies, March also happens to be B Corp Month, a fact that has been called to our attention by MASECO Private Wealth, the London-based wealth management firm that specializes in looking after Americans, and which became the first wealth manager in the UK to be awarded "B Corporation" certification back in 2014.

Here, MASECO Senior Wealth Manager George King explains what a B Corp is, and why it matters...

First of all, let me wish everyone out there, and especially all you MASECO Private Wealth clients, a happy (and ethically profitable) B Corp March.

Because March is the one month every year that we take time to acknowledge and celebrate the hard and important work that B Corporation-certified organizations around the world do, as well as what it means to be part of the B Corp movement.

B Corp, or "Benefit Corporation" certification, is a concept that was created 15 years ago in the U.S. by three friends who, according to the global B Corp website, "left careers in business and private equity and created an organization dedicated to making it easier for mission-driven companies to protect and improve their positive impact over time."

B Corp certification is often described as being, to businesses generally, what the "Fair Trade" designation is to products such as coffee and produce.

The movement certainly has come a long way from 2014, when MASECO became the first wealth manager in the UK to be awarded B Corporation status. Back then, there were just six B Corp companies in Britain. Today, there are more than 640 B Corporations in the UK alone – across 55 industries, which employ more than 39,500 employees.

And globally, according to the B Corp movement's latest annual report, there are more than 4,000 certified B Corporations in more than 150 industries, in 77 countries across six continents around the world.

As the American Expat Financial News Journal reported last August, some of the well-known companies that have joined up recently have included London-based Coutts & Co., the bank, and Mishcon de Reya, the law firm.

A number of well-known major retailers, including the UK's Ocado, Waitrose and Boots, are not themselves Certified B Corporations, but have within their online retail structures  "B Corp shops" that feature products made by B Corp-compliant companies. (Waitrose's online B Corp "aisle," for example, which may be viewed by clicking here, was introduced in 2019, and includes such products as teabags, vintage port, beer, wine, bottled waters, cleaning products, chocolates, yoghurt, baby foods, popcorn, ketchup and breakfast cereals.)  An in-store B Corp display, below, was spotted this past week in a Waitrose shop in Chester, England. 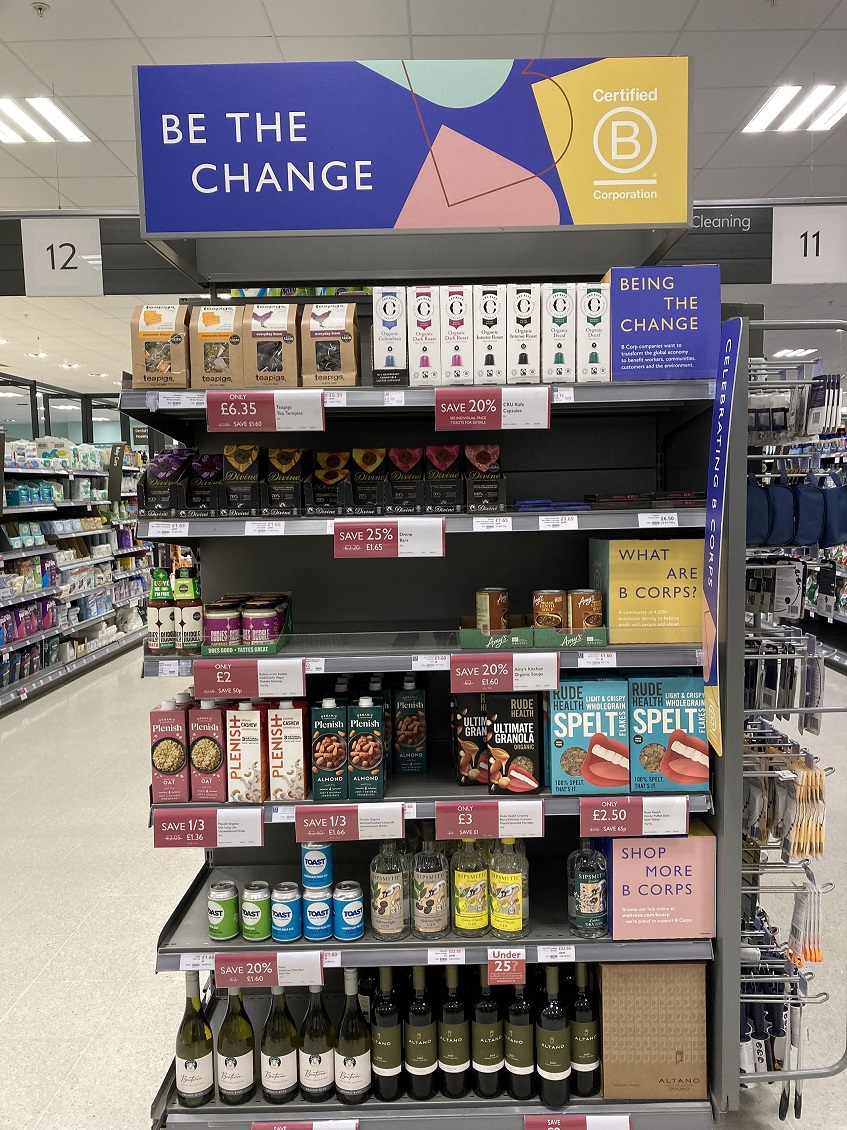 And yet, it seems that many people still don't know what a B Corp is, or what it means when someone says a company has attained B Corp "status."

Allow me to try to explain!

Certified B Corporations are a new kind of business that balances purpose and profit, and considers the impact of their decisions on their workers, clients, suppliers, community, and the environment.

Being a B Corp is a clear sign to all internal and external stakeholders that your business is an ethical enterprise.

Gaining B Corp status means that you are committed to treating people, communities, and the environment as they should be treated: respectfully, sustainably, and ethically.

It is also about showing more than just a keen sense of CSR (Corporate Social Responsibility), but actually proving this, via credible, externally- and independently-verified (by the so-called B Lab) means, a process that is also completely transparent (every B Corps assessment report is made available by the B Lab).

The B Corp certification process

As is explained on the website of the international B Corp organization, to gain certification companies must "demonstrate high social and environmental performance by achieving a B Impact Assessment score of 80 or above" while also passing a "risk review"; multinational corporations must also meet certain baseline requirement standards.

Applicant companies are also required to legally change their corporate governance structure to be accountable to all stakeholders, not just shareholders, and achieve "benefit corporation status" if it's available in their jurisdiction. They're also expected to "exhibit transparency by allowing information about their performance, measured against B Lab’s standards, to be publicly available on their B Corp profile on B Lab’s website."

MASECO co-founder and Managing Partner Josh Matthews said, of MASECO's motivations for becoming B Corp certified: "We wanted our values to shine through in what we did every day (including in business), as opposed to just in our personal lives.

"It was also a signal to clients and the broader world that we strive to manage and operate ethically and sustainably, and demonstrate that this is at the heart of what we do.

"In addition, it influenced the way we invested and gave money to charities, while promoting the standards of accountability that being a B Corp member represents.

"For example, for every client we take on, we make charitable donations to help feed orphans in Africa, buy mosquito nets for people in at-risk areas, and to help inoculate people from river blindness and other diseases.

"Before becoming a B Corp, we were already big believers in the philosophy of 'doing well by doing good.' So rather than saying, 'we should become a B Corp because it seems the right thing to do, let's make all these changes to fit that,' it was more like we said, 'we are already aligned with these values, this is who we are, and it makes sense that we are a part of the movement'."

In celebration of March being B Corp Month, MASECO will be holding its first Balancing Purpose and Profit webinar, for clients and staff.  Among the topics due to be discussed will be ESG issues, specifically those having to do with the way businesses and governmental entities tend to set the direction for the future.

Also throughout the month, we will be promoting environmental awareness days, both internally and externally, including Global Recycling Day (March 18) and World Water Day (March 22). 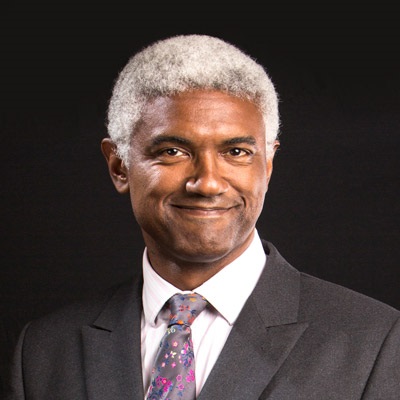 This article was adapted from a piece on the MASECO Private Wealth website, entitled "What is a B Corp, and what does it mean to be part of the movement?" Its author, George King, pictured left, is a London-based, senior investment professional with MASECO Private Wealth, who specializes in advising high-net-worth American families on their cross-border financial matters.

American by birth and education, King joined MASECO in 2015, before which he worked for such companies as RBC Wealth Management, Barclays Wealth, AllianceBernstein and Credit Suisse First Boston.

To read about how King and his MASECO Private Wealth colleague, Andrea Solana, viewed a then-hard-to-ignore surge in interest in ESG investing that was beginning to emerge in August 2019, which coincided with major "Extinction Rebellion" demonstrations held around that time in London and elsewhere, even as temperatures in certain parts of Europe were touching and even exceeding 40°C in certain EU countries, click here.

MASECO Private Wealth was founded in June, 2008 in London by James Sellon, Josh Matthews and two former colleagues to look after American expatriates living in the UK. Sellon and Matthews had previously helped to set up and run a Canary Wharf, London-based wealth management operation for Citi Private Bank, which advised high-net-worth U.S. citizens. Since the firm's founding, the need for specialist advice among American expats around the world has grown exponentially, helping to fuel MASECO's growth and prominence.